Penny's Hill has been making waves in the wine world for some time now, shaking up old perceptions of new world wine, delivering premium quality wines and winning the international awards to go with them.

It may be no surprise considering that the local wine-growing tradition dates back to the 1850s, and the stunning scenery enjoys a Mediterranean climate.

It's this Mediterranean climate and sandy loam on clay soil composition that delivers a rich, aromatic bouquet, with intense fruit and a refined tannin structure and Its elevation and aspect looking over the Gulf of St. Vincent has proved ideal for growing a good crop of top-quality grapes, especially low-yield Shiraz, Cabernet Sauvignon and Grenache.

Penny's Hill's success in the wine industry, therefore, is no surprise.

Penny’s Hill’s first vines were planted in 1991 by Tony ­­­­and Susie Parkinson.  They purchased the Malpas Road land in 1993 - producing Shiraz, Cabernet Sauvignon and Merlot, and then Goss Corner in 1996 – yielding Shiraz, Merlot and adding Viognier. Both areas produce velvety, lush wines with a rounded finish from Biscay clay.

The winery consolidated the three areas into an estate of just over 100 acres in the historic McLaren Vale.

Penny’s Hill prides itself on its sustainable and their small batch approach to wine-making. The vines are carefully tended throughout the growing cycle and harvested separately. The grapes are watched and tested regularly for optimum ripeness, then selected and hand-picked to ensure both the highest possible quality and the best possible fruit. This allows the wine-maker to produce exceptional blends balancing interests, complexity and texture - matured in best quality French oak barrels before blending.

The brand also enjoys close relationships with vineyards in the higher, cooler Adelaide Hills region, which produce Sauvignon Blanc and Chardonnay grapes with all their natural acidity and characteristic freshness - resulting in high quality white wines.

McLaren Vale nestles between the foothills of the Mount Lofty Ranges and the idyllic bay of St Vincent with its pristine beaches. Along with the distinctly Mediterranean climate, it proved the ideal location for the pioneers of South Australian wine-making in the 1850s.

The local community produces a variety of artisanal products including olive oil, organic fruit and cheeses all produced with the same ethos and supported by the wineries offering them at their cellar door tastings. The region is making a name for its fantastic culinary achievements as well as its international award-winning wines.

McLaren Vale is one of the greatest and oldest names in the  Australian wine industry. It's the birthplace of wine in South Australia and  it lies just south of the  state of South Australian's capital city,  Adelaide.

At last count there were 160 vineyards and 74 cellar doors in the McLaren Vale region, each serving up some of the country's most sought-after drop.

Today, Mclaren Vale has over 7,300 hectares under vine and with demand for its wines at an all-time global high.

Alexia has won an array of accolades for Penny’s Hill, including World’s Best Cabernet at France’s Concours International des Cabernets and the Best Australian Red in Show two years running at Mundus Vini in Germany.

A passionate and experienced winemaker, Alexia has been winemaking in McLaren Vale since 2004 and has undertaken vintages in both France and Italy. Responsible for the production of many acclaimed wines, Alexia is no stranger to medals, trophies, awards and accolades both domestic and international

READ here Alexia's interview with The Fabulous Ladies of Wine 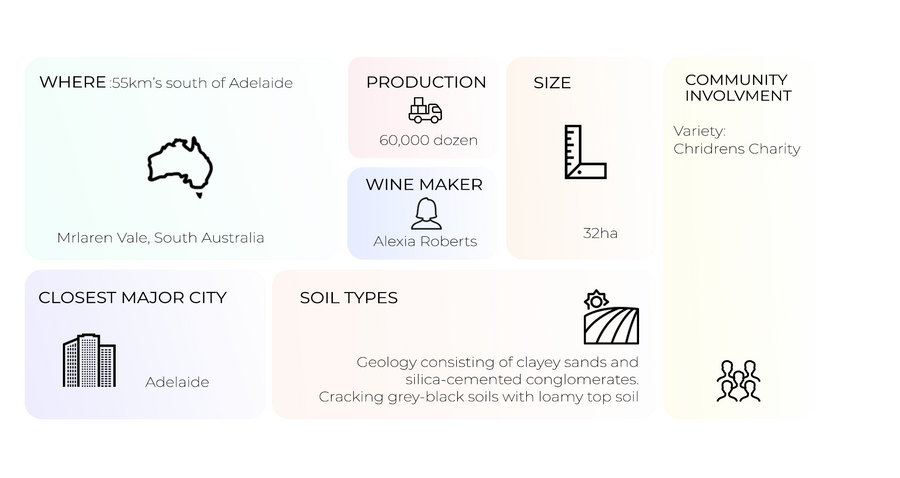